Several species of malaria parasites of rodents other than murines have been described but these have been little studied and, since none of their complete life cycles has been described for any of these parasites, there is insufficient material available for critical comparisons to be made (ref. #2). 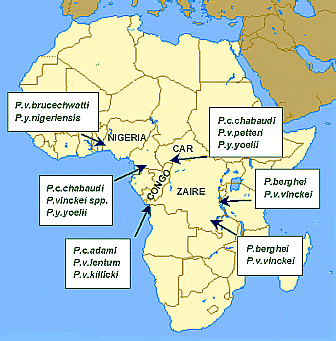 Fig.1: Foci of murine malaria in Africa (from: reference #4)

The species and subspecies of rodent malaria are listed in Table 1. All parasites have been collected from either murine rodents or from mosquitoes in Central Africa (see Figure 1 for the foci of murine malaria in Central Africa). The original discovery of P. berghei (K173 strain) was made by Vincke and Lips in 1948. A number of isolates (strains) have since then been collected from the wild (see Table 1 and the overview of P.berghei isolates and laboratory lines from the collection of the University of Edinburgh). For detailed descriptions of the discovery of the different rodent parasites and their adaptation to laboratory conditions see the references #1-5 (see also the overview of isolates and laboratory lines of other rodent malaria species from the collection of the University of Edinburgh). The four murine malaria species does not interbreed and can be distinguished from each other by small differences in morphological and developmental characteristics and iso-enzyme patterns (see Table 2 for a number of morphological and developmental differences). Many of the subspecies can interbreed under laboratory conditions. They are separated mainly on the basis of geographical distribution and iso-enzyme patterns (see references #1 and #5 for a detailed description of the iso-enzyme variations between species and strains of rodent parasites).

Table 1: The species and subspecies of rodent malaria parasites (information from ref. #2 and #3)

The four rodent malaria parasites are principally parasites of thicket rats. Among many thousands of murids examined in Africa, only few others have been found infected. P. berghei has been isolated from three different species of thicket rats (Table 1; ref.#2). The restriction of murine malaria parasites to only a few species of rodents in nature is not because of a lack of infectivity to all but a few murids. On the contrary, the parasites have been shown to have a wide range of infectivity. The range of hosts experimentally infected by the inoculation of sporozoites of P. berghei and P. yoelii includes, among others, white mice, laboratory rats and hamsters. The range of infectivity of sporozoites of P. vinckei and P. chabaudi is less wide. Laboratory rats and hamsters are insusceptible, but mice and G. surdaster are all readily infected (ref. #2). Other (sub)species parasites have been found in Thamnomys rutilans (table 1).

The animal shown in Figure 2 was from a small breeding colony in the Institute of Tropical Medicine in Antwerp that originated from about fifty animals that were trapped in an area of 5 km around Kaindu, 20 km northwest of Mumbwa near the Kafua National Park (Zambia) in 1996. Determination of the species was based on analysis of the cytochrome B sequence of mitochondrial DNA at the Department of Animal Ecology of the University of Antwerp. In some handbooks, Grammomys surdaster is called Grammomys dolichurus (woodland thicket rat) (Kingdon, J. (1974). East African Mammals. Vol.II part B (Hares and Rodents). London, Academic Press; R.M. Nowak, Walker’s mammals of the World, vol. 2; Johns Hopkins University Press) but the taxonomy of thicket rats is still in a state of flux and in review. Based on differences in mitochondrial DNA G. surdaster  and G. dolichurus are well-separated species and the differences warrant grouping them in different taxa (pers. comm. prof. dr. H. Leirs, University of Antwerp). For more information on G. dolichurus see Mammal Species of the World (Wlison & Reeder, Third Edition)’ and Animal Diversity Web.

The only known vector of murine malaria parasites is Anopheles dureni millecampsi, the invertebrate host of P. berghei and P. v. vinckei. The range of infectivity of murine malaria parasites to anopheline mosquitoes is much less than it is to vertebrates. Many of the species of Anopheles established in the laboratory are partially or totally refractory to infection and, even in the mosquito which is the best experimental vector (Anopheles stephensi), the comparatively low numbers of sporozoites that invade the salivary glands of the mosquito suggests that the conditions for sporogony in this artificial host are not optimal (ref. #2).

P. berghei infects laboratory hamsters, rats and mice. A susceptible mosquito vector for P. berghei, which is widely used in the laboratory, is Anopheles stephensi (ref. #6).

Relationship of rodent parasites to other mammalian malaria parasites 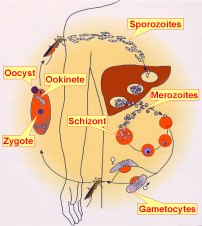 The entire life cycle, as well as the morphology of the different developmental stages, is conserved between mammalian parasites.
The life cycles and the different developmental stages of all mammalian malaria parasites are highly comparable. Mammalian malaria parasites share the following characteristics (see the Figure on the right for the different life cycle stages): they are only infectious to Anopheline mosquitoes, haploid sporozoites invade and develop only in liver cells; after multiplication in the liver the parasites (merozoites) invade and multiply in red blood cells; in the blood, a relatively small percentage of parasites develop into gametocytes, the precursor cells of the haploid gametes; fertilization and development of the diploid zygote into ookinetes occur in the midgut of the mosquito; mature ookinetes penetrate the cells of the midgut wall and develop into oocysts on the outside of the midgut.

Differences in the life cycle between various mammalian malaria parasites are mainly restricted to the duration of development and size of the different dividing stages.
For example, there are significant differences in developmental time and size of liver (pre-erythrocytic) schizonts, erythrocytic schizonts and oocysts (Table 2). These schizonts and oocysts are the result of multiple rounds of mitotic division resulting in the production of (large numbers of) daughter parasites. Mature schizonts and oocysts of the different malaria parasites can differ in size and can contain different numbers of daughter parasites. Studies on the ultrastructure of these stages demonstrated the similarity of the process of mitotic multiplication during schizont and oocyst development in the different species. Differences between the mammalian parasites are therefore the result of differences in growth rate (length of the G1 phase of the cell cycle), in the rate of mitotic division (length of the S- and M-phase of the cell cycle) and the number of mitotic divisions per schizont or oocyst. There are few further exceptions of more fundamental differences in development between the different mammalian species. One example is the existence of the hypnozoite stage in P. vivax and some other primate malaria species that is not present in other mammalian species. The hypnozoite is a dormant (arrested) liver stage that can persist for months or even years before it starts to develop into a liver schizont, resulting in blood-stage infection. A second example is the distinct morphology and developmental time of the gametocytes of the human parasite P. falciparum in comparison with those of other mammalian species. While most species produce round or oval-shaped gametocytes with a developmental time somewhat longer than asexual development, gametocytes of P. falciparum have a developmental time of 8-11 days and a distinct banana-shaped appearance.

The invasive, non-dividing stages such as merozoites, sporozoites, ookinetes and microgametes of the different mammalian malaria parasites are very similar in size and morphology.
The similarity of these stages of the different species is clear from investigations on the ultra-structure of these stages. Also, molecular, biochemical and genetic studies demonstrate the similarity of these stages between the various mammalian Plasmodium species. For example, a number of (surface)proteins demonstrate conservation both in structure and function between rodent and human malaria parasites (such as CS, TRAP, P45/48, CTRP, P25, P28, AMA-1, MSP-1).

The genome organization is conserved between rodent and human malaria parasites.
Studies have demonstrated a high level of conservation of genome organization between rodent and human parasites (see Genome of P. berghei for more information on genome organization of P. berghei). The genome of both P. falciparum and the four rodent parasites are organized into 14 linear chromosomes, ranging in size from about 0.5-4 Mb. They possess identical telomeric repeats [CCCT(A/G)AA], organized into tandem arrays. The chromosomes are compartmentalized into relatively conserved internal regions (core regions) flanked by

highly polymorphic subtelomeric regions. These variable subtelomeric regions are the sites where multigene families are located encoding variant proteins.  Several of these proteins are transported to the surface of the infected erythrocyte and are involved in antigenic variation and immune evasion. In addition, the subtelomeric regions contain non-coding DNA repeat sequences. Both the subtelomeric genes and many of the variant multigene families are mostly species-specific and are not conserved between rodent and human parasites. In both P. falciparum and P. berghei rearrangements in the subtelomeric regions, involving repeat sequences, are the main cause of intra-species size differences between homologous chromosomes. Comparative mapping of genes located in the central regions of the chromosomes has shown that both linkage and gene order appear to be well conserved between human and rodent parasites, resulting in a significant level of synteny between these species. Moreover, conservation of specific gene domains, regulatory control elements, organization of complex genomic loci and the presence of conserved multi-gene families in rodent and human parasites all emphasize the high similarity of genome organization, gene content and gene-regulation.

Despite the overall similarity between mammalian malaria parasites, many ‘small’ differences exist that are directly related to the interaction of the parasites with their hosts.
These small differences may have a significant impact on host-parasite interactions and may influence important features such as pathology, virulence and immune escape. Well-known examples which have been studied at the molecular level are: differences in variant proteins involved in recognition and attachment of erythrocytes, resulting in the invasion of different red cell populations (for example reticulocytes versus mature erythrocytes); differences in variant proteins on the surface of infected erythrocytes leading to differences in sequestration, immunogenicity and virulence of blood stages.

There are many small differences between the four rodent malaria parasites, for example, differences in morphology, developmental time and size of different stages (Table 2) and iso-enzymes. These variable characteristics influence host-parasite interactions and are responsible for differences in the course of infection, virulence and pathology. A well-known example is the difference in the preference for invading different red blood cell populations: whereas P. chabaudi and P. vinckei invade both immature and mature red blood cells, P. berghei and P. yoelli have a marked predilection for reticulocytes. Another example is the level of synchronicity of blood-stage infection. P. chabaudi and P. vinckei show synchronous development of their blood stages, while the other two species have relatively asynchronous infections in laboratory rodents. The optimum temperature for development (sporogony) in the mosquito host also differs between the four species. Moreover, variation between the different isolates or lines of one species exists that can result in different parasite-host interactions. Well-known examples are the differences in reticulocyte preference and virulence of isolates/lines of P. yoelii. In reference #1 a number of differences between isolates and species of rodent parasites are described that are related to the course of liver and blood-stage infections in laboratory rodents.