See for detailed information on the genome and genome sequence of P. berghei (and other rodent malaria parasites) the following papers:

a Genome version: 1.5.2013; Apicoplast genome from accession numbers: X95275, X95276; b compared to the PbA genome; c in new versions, this includes pseudogenes and partial genes, but does not include non-coding RNA genes; d figures include all genes except those annotated as `hypothetical’, `conserved Plasmodium protein, unknown function’, `conserved protein, unknown function’, `conserved rodent malaria protein, unknown function’ or `Plasmodium exported protein, unknown function’.
The first draft genome of a rodent malaria parasite (RMP) was published in 2002 for P. yoelii yoelii 17XNL. This was followed by publication of draft genomes of P. berghei ANKA (PbA) and P. chabaudi chabaudi AS (PcAS) in 2005. Comparisons with the genome of the human parasite P. falciparum and other primate malaria species defined a large set of core genes that are shared between RMPs and primate malarias. Although the availability of draft RMP genomes made a significant impact in applying post-genomic technologies for understanding malaria biology and were used in many follow-up functional genomics studies to analyze gene regulation and function, these RMP genomes were highly fragmented and were annotated with little or no manual curation. The fragmented nature of the genomes has hampered genome-wide analysis of gene regulation and function, especially of the (subtelomeric) multigene families. To utilize RMP models to their full potential, high-quality reference genomes were produced in 2014: for PbA and PcAS large-scale improvement of their existing genomes, with re-sequencing, re-analysis and manual re-annotation, and for P. y. yoelii a genome sequence was produced de novo from the virulent YM line using the latest sequencing technologies and computational algorithms. In addition, comprehensive RNA-seq data was produced, derived from a number of life-cycle stages to both improve gene model prediction and to provide genome-wide, quantitative data on gene expression. By sequencing additional isolates/lines of P. berghei, P. yoelii and P. chabaudi (including the subspecies P. c. adami)  genotypic diversity was documented that exists within different RMP species. The availability of RMP reference genomes in combination with the RNA-seq and genotypic diversity data serve as excellent resources for gene-function and post-genomic analyses and, therefore, better interrogation of Plasmodium biology and development of anti-malaria interventions (from: Otto et al. (2014). A comprehensive evaluation of rodent malaria parasite genomes and gene expression. BMC Biol. 2014 Oct 30;12:86).

The genome is organised into 14 chromosomes and has a total size of 18.5 Mb.

Like P. falciparum, the nuclear DNA of P. berghei has a high overall A+T content of about 80%. This (A+T)-rich bias is unevenly distributed between protein-coding and non-coding regions. All open reading frames are relatively (G+C)-rich (25-30%), while the (A+T) composition of the vast majority of the intergenic regions and intragenic introns can rise to more than 90%.

P. berghei has two extra-nuclear DNA elements comparable to P. falciparum: the mitochondrial DNA and the plastid DNA (organelle genomes). All Plasmodium species analysed so far contain a ~6 kb tandemly repeated mitochondrial (mt) genome which codes for only three proteins (cytochrome b and two subunits of cytochrome oxidase) as well as two fragmented rRNA’s. The circular plastid genome (apicoplast) is ~30 kb in size. The apicoplast is a vestigial plastid homologous to the chloroplasts of algae and plants. The plastid (known as the apicoplast; for apicomplexan plastid) is non-photosynthetic and very much reduced, but has clear endosymbiotic ancestry including a circular genome that encodes RNAs and proteins and an ensemble of bacteria-like pathways to replicate and express its genome plus an anabolic capacity generating fatty acids, haem and isoprenoid precursors. A key process within the apicoplast is the synthesis of the five-carbon isoprenoid precursor molecules. All isoprenoids are derived from these precursors and isoprenoid functions are required in all living cells. These molecules fulfill a variety of cellular roles, including participation in key processes such as N-glycosylation, electron transport (ubiquinone), and protein prenylation. Isoprenoid biosynthesis occurs via a metabolic pathway, known as the methylerythritol phosphate (MEP) pathway. Because this organelle is cyanobacterial in origin, the MEP pathway is shared by the majority of eubacteria and other plastid-containing eukaryotes, such as plants and algae.

Merozoites, gametes and sporozoites are haploid. The only diploid stage is the ‘young’ zygote, just after fertilization. The dividing stages, such as schizonts and oocysts are ‘polyploid’, because DNA replication and nuclear division are not immediately followed by cell division, resulting in a ‘syncytial’ cell with many nuclei. Only towards the end of schizogony/sporogony does the parasite start to divide its cytoplasm by budding of uninuclear haploid merozoites/sporozoites. The ookinete stage has a nucleus containing the ‘tetraploid’ amount of DNA resulting from fertilization and meiosis without immediate nuclear division. Nuclear division only starts in the oocyst stage.
During asexual blood-stage development DNA synthesis starts around 16 hours after invasion in the old trophozoite, just before the first nuclear division in the schizont. Throughout schizogony DNA replication and genome segregation are alternating events. The timing and rate of DNA synthesis in blood-stages of P. berghei is comparable to that in P. falciparum blood stages, where DNA synthesis also starts in the old trophozoites and continues during schizogony.

Replication of the (extra-nuclear) plastid genome of P. berghei occurs (just before and) during schizogony as has been found in P. falciparum.

See figures 1-5 for pictures of the 14 chromosomes separated by pulsed field gel electrophoresis.
The chromosomes of Plasmodium species do not condense prior to mitosis like in most other eukaryotes. Due to the lack of condensation and the small size chromosomes cannot be visualized by light-microscopy or by standard electron microscopy. Pulsed field separation of chromosomes revealed that P. berghei has 14 chromosomes in the size range of 0.5-4 Mb (see Figs. 1-5). 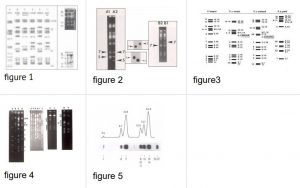 Centromeres and telomeres have been (functionally) characterized in P. berghei. Telomeres with the repeat sequence of CCCTA(G)AA have been characterized and this sequence is similar in all Plasmodium species analysed so far. The total length of a telomere is about 1-1.2kb.

The genomes of rodent malaria parasites contain a number of multigene families located in the subtelomeric chromosomal regions. These include a large family of so-called `Plasmodium interspersed repeat genes’ (pir), that are present also in other human/primate Plasmodium species, such as the human parasite P. vivax. Most of these gene families are expressed in blood stages and these proteins show features that have been reported to contribute to immune evasion through antigenic variation and may play a role in the sequestration of infected red blood cells and virulence.

In comparison with the highly variable subtelomeric regions of Plasmodium chromosomes, the central, core regions are much more stable and conserved between different rodent malaria parasite species. A high level of conservation of gene linkage groups (synteny: gene location and order on chromosomes) exists between the four rodent malaria parasite species rodent parasites, emphasizing a low frequency of large-scale rearrangements in the core regions of their chromosomes. Although the level of synteny of genes is lower when the genomes of rodent and human species of Plasmodium are compared, significant conservation of genome organization has been observed.

Size differences between homologous chromosomes of up to 0.5Mb have been detected in parasites from different strains or clones of P. berghei . Size differences result from (large-scale) chromosomal rearrangements, mainly affecting the subtelomeric regions. At this moment no direct evidence exists for the presence of developmentally regulated or programmed DNA rearrangements in Plasmodium by which parasites increase antigenic variation or regulate gene transcription. Most size polymorphisms of chromosomes result from ‘aberrant’ chromosomal rearrangements. These DNA rearrangements occur frequently in the subtelomeric regions, while the internal parts of the chromosomes (core regions) appear to be more conserved. Since many multi-gene families that are associated with antigenic variation are located in the subtelomeric regions, these rearrangements may constitute a significant form of genetic variation. A number of chromosomal rearrangements leading to significant changes in the size of chromosomes have been characterized in P. berghei, including chromosome breakage and healing, loss and acquisition of subtelomeric repeats and chromosome translocation. The mechanisms underlying chromosome size polymorphisms in P. berghei are comparable to those of P. falciparum. In P. berghei chromosome size polymorphisms are most frequently the result of loss and acquisition of subtelomeric repeat sequences. In rodent parasites kept under laboratory conditions, large-scale rearrangements have even been shown to affect chromosome number. In response to drug pressure using the antifolate drug pyrimethamine, part of chromosome 7 containing the drug-sensitive dihydrofolate reductase-thymidylate synthase gene was duplicated to form a small ‘mini-chromosome’ of 400-500kb. This (partial) chromosome duplication, found both in P. chabaudi and P. berghei resulted in a population of parasites with 15 instead of 14 chromosomes.
Research on the mechanisms of chromosome size variation in P. berghei has provided evidence that recombination can occur between non-homologous chromosomes. These kinds of recombination events are significant since they can result in genetic exchange, changing gene location and the clustering of genes.